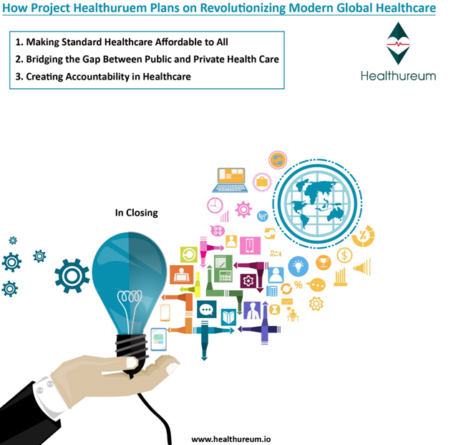 Look around. There’s no doubt that the global healthcare industry is in deep crisis. While some and industrialized countries bask in the glory and goodness of compulsory health insurance backed by state-of-the-art clinical facilities, millions of people from the most deprived economies die every week from the simplest of diseases. In a similar tandem, while some nations in the Korean Peninsula boast of having the least prevalence of a scourge such as HIV/AIDS, the same disease has been declared a national disaster in more than a dozen African countries. This regional and economic disparity in modern-day healthcare is one of the glaring problems that Project Healthureum seeks to correct. And this will be achieved in the following ways.
1. Making Standard Healthcare Affordable to All
Healthcare is expensive in some of the poorest economies primarily due to the lack of easy accessibility of some of the necessary infrastructural provisions needed for diagnosis and treatment. As such, a patient has to spend thousands of dollars traveling halfway around the world just for a simple consultation session with a qualified physician. As if that is not enough, vital treatment programs in such countries are often concentrated in large urban settlement thereby – to some extent – marginalizing those from a rural background.
Project Healthureum seeks to change this by applying blockchain technology to eliminate such access limitation and delays in relaying the prognosis. This way, a patient will only have to feed in their bio-details accompanied by the infection’s symptoms into a transparent platform and get an accurate prognosis within a matter of hours. What’s more, seeking a second opinion, further diagnostic services or another prognosis will never be a hurdle in quest for excellent healthcare. In effect, the culmination of all these positive contributions will essentially result in a drastically reduced cost of quality healthcare.
2. Bridging the Gap Between Public and Private Health Care
There’s no denying that private clinical facilities often offer the creme’ de la creme’ of quality healthcare that can be accorded to man. Aside from being uber expensive, the perks that come with private healthcare is one of the main reasons that a rich man has a higher life expectancy than a person from an economically disadvantaged background. If anything, private clinics are often better equipped with the latest medical infrastructure and staffed with the most qualified personnel. In essence, money has accorded the wealthy access to the finest clinical services and facilities.
On the other hand, public health facilities – especially in most developing nation -are often average at best. In the worst cases scenario, they are nothing short of understaffed, under-equipped or even absent altogether. And that would explain why the poor are usually among the first section of the population to be affected when a new disease breaks out.

However, this does not have to be narrative. There don’t have to be a glaring disparity between private and public healthcare structures. Project Healthureum is projected to correct this by creating an immutable link between the two using cryptography and blockchain technology. As such, standard healthcare can be accessible and affordable to all.

Accountability is one of the most sensitive aspects of modern medicine that is seriously lacking in today’s global healthcare scene. If anything, missing records, tampered prognosis, wrong diagnosis are the order of the day in a majority of public and a section of private hospitals. And considering that a patient’s medical history and biodata plays a significant role in the accurate diagnosis of a given ailment, poor recordkeeping will often translate to substandard healthcare.
Also, cases of hacking of connected medical devices such as pacemakers, cardiograms, and kidney dialysis machines have lowered the users’ confidence levels in the usefulness and reliability of such significant strides in medicine. As a result, fewer people are often willing to spend a colossal amount of money in acquiring connected medical devices compared to before. On the flipside, the integration of blockchain technology in the interoperability of such structures will make them virtually tamperproof. Finally, we can have a world where one does not have to worry about hackers and unauthorized leaking of sensitive medical information whenever they are seeking consultation services.

In Closing
Through collaboration between public and private healthcare structures standardization of global healthcare seems well within reach. Besides, if this is implemented in a decentralized ecosystem, where blockchain technology takes the centerstage, then competent, safe, and responsive health care for all can be a reality.
https://healthureum.io/