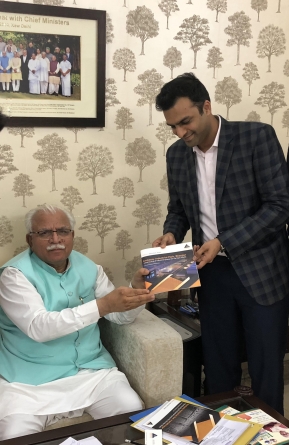 Mumbai: The increasingly crucial role of the logistics sector has been highly discussed along with India’s rapid development story.  With its pioneering approach, Embassy Industrial Parks was formed with a vision to create exemplary, well-planned, technology-enabled, self-sustaining industrial parks across the 8 main cities of the country. Within the next 2 years, they target having a 30 million square foot portfolio of next-generation warehousing and logistics solutions.

A crucial expansion strategy has been to align with various state governments. In this vein, Embassy Industrial Parks has signed an MOU of INR 1910 crores with the government of Haryana. The states’ strategic importance at the epicentre of North Indian logistics is driven by its central location in NCR, land availability, cheaper land costs, key consumption market and connectivity with the Golden Quadrilateral. Embassy saw instant success in NCR when their debut project, a 600,000 square foot industrial park in Bilaspur sold out before completion.

The plethora of developments at Embassy Industrial Parks continues, as they now announce another major acquisition in this region – this time 110 acres of prime real-estate in Farrukhnagar. Proximity to the large consumption centres of IMT Manesar and Gurugram along with ease of connectivity to the Delhi-Jaipur highway make Farrukhnagar an ideal location. The area houses leading companies from various sectors such as E-commerce, automotive, logistics, retail & FMCG.

Over the years, with improved social and civic infrastructure and availability of skilled and semi-skilled manpower, Farrukhnagar and neighbouring locations have evolved into a world class automobile hub with the manufacturing sites of Denso, Panasonic, Maruti Group, Hero Motors, Bajaj Auto and Honda amongst others. Proximity to the Indira Gandhi International Airport, Dwarka Expressway and the upcoming KMP Expressway further support its selection as a first-choice locale for warehousing and logistics.

Both these locations will serve as flagship parks for Embassy in North India as they continue to rapidly expand and consolidate their footprint. Embassy CEO Anshul Singhal recently met with Chief Minister Manohar Lal Khattar who congratulated the company on their speedy development. One of the most significant and tangible benefits of these developments will be the creation of an estimated 20,000 direct and indirect jobs in the state.

Embassy Industrial Parks CEO, Anshul Singhal comments “We are excited to be partnering with such a progressive and business-friendly state as Haryana. We are firmly committed to realising our ambitious plans and contributing to the development of the region. We are humbled with the rapid progress of our company and the overwhelming response to our strategy. This has indeed been an interesting time as we have gone from a start-up company just a few short years ago, to the leaders in this rapidly growing space. Bilaspur & Farrukhnagar are contributing in their own little way by creating jobs and resources for many people. Personally, this means much to me.”

This weekend, Embassy Industrial Parks was announced as the proud winner of the Fastest Growing Warehousing Company award at India Warehousing Show 2018.