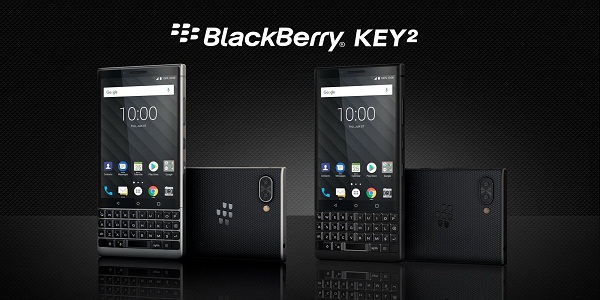 New Delhi: Following the launch of BlackBerry KeyOne, the company has come up with the new offering – BlackBerry Key2 in India. The smartphone runs on Android mobile operating system and is equipped with physical keyboard like the original KeyOne. The phone will be available on Amazon.in from July 31 and is priced at Rs 42,990.

Optiemus Infracom, based out in Noida has brought Key2 in India. The company holds the rights for manufacturing and distributing BlackBerry-branded phones in the country.

The latest offering from the company comes equipped with Series 7 aluminium alloy frame, a textured diamond grip back panel and a physical QWERTY keyboard. The keyboard enables users to launch apps and activate commands with a press of single key.

The feature of ‘Speed Key’ gives the user convenience of opening the apps automatically and is being given on the right edge of the device.

This is for the first time that the BlackBerry flagship smartphone is equipped with a dual camera setup and includes portrait mode and optical zoom features.

The phone also sports 3.5 mm audio jack on the top edge whereas the power and volume buttons are on the right edge of the phone.

The BlackBerry flagship smartphone runs on Android 8.1 Oreo out-of-the-box and is powered by a 64-bit octa-core Qualcomm Snapdragon 660 SoC with 6GB of RAM and 64GB internal memory. The phone also comes with a 128GB variant. The device supports dual-SIM (Nano).

The smartphone also comes with a 4.5inch full-HD with resolution of 1080×1620 pixels IPS LCD display with 2.5D Corning Gorilla Glass with aspect ratio of 3:2. The pixel density of the device is of 433ppi and colour depth is 24-bit.

The memory of the phone can be expanded via microSD card up to 256GB.

For the first time, BlackBerry is offering a dual camera setup in its smartphones. BlackBerry Key2 comes with two 12-megapixel rear sensors including Dual Tone LED flash. The phone is also equipped with HDR, 4K video recording at 30FPS and dual PDAF.

The phone is powered by a powerful battery of 3500mAh with Quick Charge 3.0 support. This enables users to use the phone for more than 25 hours. Also, the device has been enabled with 4G LTE connectivity on both SIM cards, Wi-Fi 801.11ac, dual-band 2.4GHz, 5GHz, Bluetooth v5.0 LE, GPS, GLONASS, Beidou, NFC, FM radio, a 3.5 mm headphone jack and USB Type C.

Commenting on the launch Hardip Singh, Executive Director, Opteimus Infracom said, “The response we received for the KeyOne was encouraging in India and other regions such as Sri Lanka and Bangladesh. The BlackBerry Key2 is a global device, and we are bringing it to India.”

On future plans, he said, “The company is developing more BlackBerry-branded phones – code-named Ghost and Ghost Pro. The initial plan was to launch the devices in the last quarter, but they got delayed citing unknown reasons. But the new phones will be out within this quarter.”